To share your memory on the wall of Thomas Landvatter, sign in using one of the following options:

Print
Thomas F. Landvatter, 86, of West Bend passed away on Monday, May 18.

Tom was a lifelong resident of West Bend and was a mainstay of the area business community for many decades. Tom was born August 31, 1933. After attending West Bend High School Tom served in the US Army from 1951-1955 where he was stationed in West Germany. Tom then returned home and joined his father in the family business of Landvatter’s Radio and TV Service.

Following a brief time away from the business, Tom re-established the company as Landvatters in 1973 when he purchased it from his father Fred. Though he did some retail, he is best known for the business communication and closed circuit television systems that he designed and installed at many area companies and establishments. Those who knew and worked with Tom know that he valued the personal friendships that he developed just as much as the business itself.

Following heart bypass surgery Tom sold the business in 2000. At the time he told the West Bend News that “There’s only two people I have ever worked with where I haven’t been self-employed – the five years for another company and Uncle Sam. It (being your own boss) gives you a sense of achievement that you yourself were responsible for everything. You felt good about doing a job and doing it right.” The idea of doing a job right was at the heart of Tom’s life philosophy.

Tom loved the City of West Bend and spent many years actively involved in the local Kiwanis club where he served as President of Kiwanis Club 1992-1993; In 1993, he was awarded the Meritorious Award for his outstanding and dedicated service to the community. In 2000, Tom was awarded the George F. Hixon Fellowship Award. The George F. Hixson Fellowship Award is named for Kiwanis International’s first president, Hixson, Fellowships are awarded to people who have contributed significantly to Kiwanis’ history of generosity. In fact, clubs and Kiwanians often give in honor of another person or organization—recognizing others’ help and commitment. In 2017, Tom was awarded Kiwanian of the Year by the West Bend Early Risers Club.

More recently Tom was involved in the American Legion Post 36 where in 2017 he was awarded a Certificate of Appreciation for his Chairmanship of the Flag Memorial and Dedication.

In 2019, Tom received a Certificate of Appreciation from the students and staff of the West Bend High Schools honoring Veterans who were former graduates.

Tom also pursued his hobbies of photography and gardening. His gardening acumen won him The Mayor’s Beautification Award from the city of West Bend in September of 2005.

A Memorial Service will be held at 1:00 pm on Friday July 10th at the Phillip Funeral Home Chapel (1420 W Paradise Dr. West Bend) with Rev. Clarissa Martinelli presiding. Visitation will be from 10:30 am until 12:45pm. Cemetery Service and full Military Honors to follow at Washington County Memorial Park.

To send flowers to the family or plant a tree in memory of Thomas Frederick Landvatter, please visit our Heartfelt Sympathies Store.

Posted Jul 10, 2020 at 01:20pm
Tom was always a special part of the West Bend community. Thanks for all that he has done including helping to elect Glenn Grothman, the Kiwanis projects and e ven seeing him at McDonalds. Our lives are always made better by people who are involved.
Comment Share
Share via:
JK

Posted May 22, 2020 at 10:00am
To Annette and family, Our deepest Sympathies. I was President of Kiwanis Early Risers, last year, & Tom volunteered to be our Greeter. He was always willing to help as he could and never missed an opportunity to voice his opinion. He was faithful to the USA as a Veteran. He made sure we had the Flag raised in proper etiquette. Thank You Tom for being in our lives and a valuable member of Kiwanis. Jon & Diane Kiel..
Comment Share
Share via: 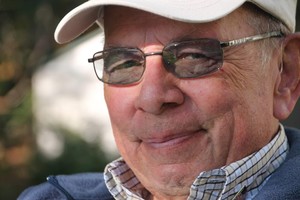